In 2009, Tim and Debbie Mazur opened The Bread House with the idea to employ the residents of GraceWay Recovery Residence in a temptation-free and wholesome environment. Debbie founded GraceWay, a long-term substance abuse recovery community for women, in 2003. As GraceWay is a non-profit organization, Debbie believed she could create a business model where a portion of The Bread House’s profits could financially aid the mission of GraceWay.

Fast forward to 2015 and The Bread House had long outgrown the residential kitchen in it’s quaint little building on Dawson Road due to an expanded product list and the acquisition of large-scale wholesale accounts. Debbie and her family had been looking for a place to relocate for several years but nowhere ever felt as if it was the right spot. Just as they had given up their search, Debbie’s son Josh saw a listing for sale online that happened to be down the street from GraceWay and encouraged the whole family to check it out in person.

Despite seeing this building nearly every day since the opening of GraceWay in 2003 and it being used as a daycare at the time, in that moment they were all seeing it in a new light. Over the course of 11 months, the Mazur family strategically renovated the historic building to have the commercial kitchen they needed while still showcasing it’s original features and honoring it’s structural integrity. In May of 2016, The Bread House opened at 520 North Jefferson Street for the public to be able to purchase products from their retail storefront. A year and a half later however, it would unexpectedly adopt a restaurant aspect to the the operation due to frequent requests from the community, and the building’s unique layout allowed for a seamless physical adaptation.

(520 North Jefferson Street was historically known as the “Pace House” and was built in 1902. It was owned by the Newcomb family of Albany at the time of purchase and had served as a home to a variety of businesses since then.) 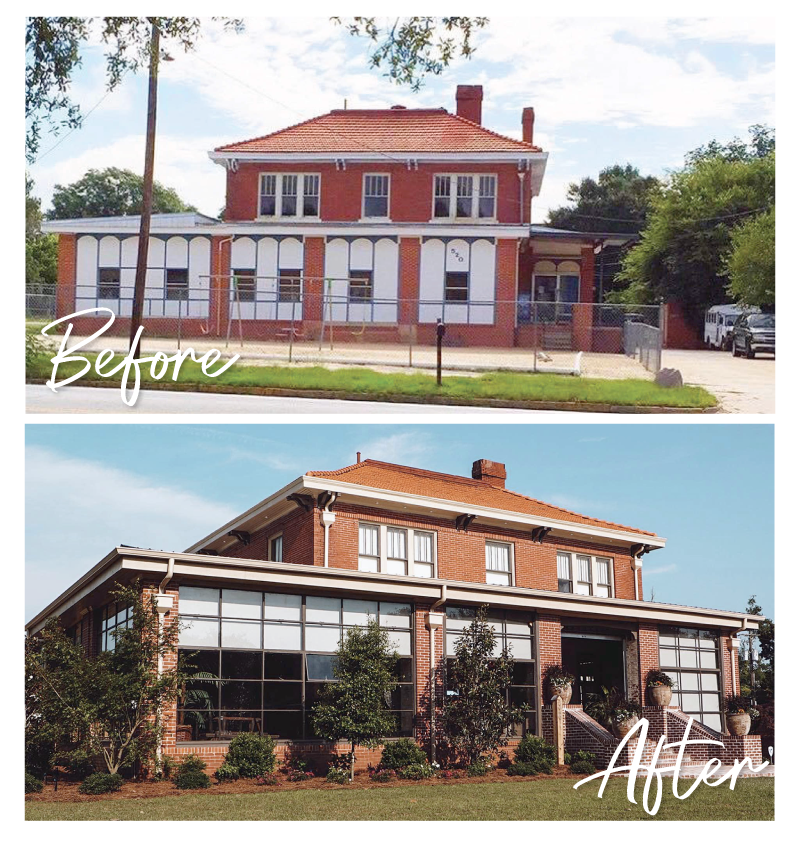 “Nutrition with a Mission”!

GraceWay Recovery Residence's mission is to provide women with the environment, tools, and employment needed to achieve and maintain long-term sobriety. The Bread House & Granary's purpose is to help fulfill GraceWay's mission by providing employment opportunities for their residents, and we have done just that for the last 13 years. The Bread House & Granary extends a safe environment for the women of GraceWay to step into the workforce and not just learn important job training skills, but also become financially independent and find purpose again.
It is also our hope to destigmatize addiction and recovery. Stigma may stem from antiquated and inaccurate beliefs that addiction is a moral failing, instead of what we know it to be—a chronic, treatable disease from which people can recover and continue to lead healthy lives. At GraceWay Recovery Residence and The Bread House & Granary, we are strong advocates for the destigmatization of drug and alcohol addiction and mental health. When we fight drug addiction stigma together, we make it easier for those who need help to get it. We also help encourage kindness and compassion instead of judgment.
Is it finding work through recovery, or finding recovery through work? We believe it's the latter. Many unfortunately tend to think of people in recovery as failures. Instead, think about the possibility. People in addiction recovery have an amazing capacity for excellence. We just need to give them a chance. It is our goal to serve every single customer and turn them into a believer.

GraceWay is a non-profit recovery community dedicated to providing women with the tools and environment needed to achieve and maintain long-term sobriety. Here is the impact YOU have on the program by shopping, eating, or hosting an event at the Bread House.

HOST YOUR WEDDING AT THE WHITTLESEY HOUSE

“By sharing a meal with us, you are directly impacting GraceWay Recovery Residence, a non-profit recovery community dedicated to providing women with the environment, tools, and employment needed to achieve and maintain long-term sobriety.”